First World War Silhouettes for the Fallen at Arundel

On Thursday 10th May 2018 transparent silhouettes took their position in the pews of Arundel Cathedral and nearby St. Nicholas Church to honour the fallen listed on their own local war memorials. 93 silhouettes were placed in both landmark locations to depict the shadows of soldiers left absent in the wake of the war.

Following the overwhelming public support for the There But Not There campaign, that saw ghostly figures of WW1 ‘Tommies’ appear all over the UK; the Armed Forces Covenant Trust Fund has pledged £2 million to drive local community support. Community and faith groups can apply for Micro funds to host their own community owned silhouette installations.

It is hoped that communities will honour the fallen on their very own local war memorials, by placing a silhouette for every man that fell in local community spaces. The silhouette installation at Arundel Cathedral and St. Nicholas Church will be present for members of the public to visit between now and Armistice Day.

Lord Henry Arundel commented: “I’m delighted by the installation of 93 silhouettes at Arundel. The There But Not There campaign is a truly outstanding national venture, not only remembering the sacrifices of those who lived through war a hundred years ago, but also channelling that into real help for veterans and others living today. Like so many other towns around the country, Arundel suffered greatly with the loss of its 93 fallen, and the Cathedral and St. Nicholas Church are the perfect places for us to remember them.”

Alongside the community silhouette installations, members of the public are being encouraged to buy their own 10”/25cm version of the Tommy to remember their own relatives.

The money raised from the sale of these commemorative figures, which are made by military veterans, will be distributed evenly between The Royal Foundation, Walking With The Wounded, Combat Stress, Help for Heroes, The Commonwealth War Graves Foundation and Project Equinox: Housing Veterans.

From Alex Clouter, the Editor of the Parish Proclaimer:

Dear Editor,
Hello, I keep thinking of the ‘There not there’ people, and last Sunday this came to me at Mass:

Shades
Oh traveller as you pass by
go tell Arundel that we died,
Not to answer glories call
but to win this peace for all. 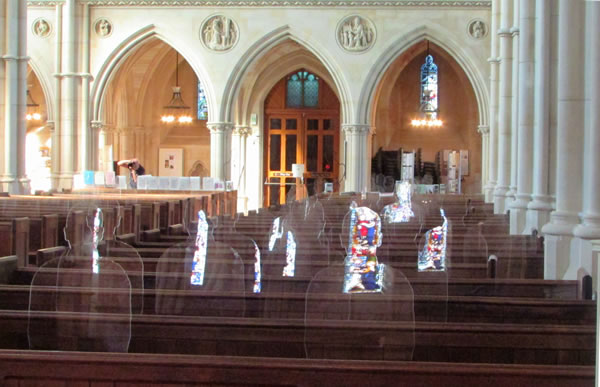 Please find enclosed a photograph taken by Ian from Yapton Cottage Gardening Society. It was entered in their competition for people of Arundel.

Ian had hoped to capture the reflections of the lovely stained glass windows in the Perspex Tommys at the Cathedral. Thought it would be of interest for the Winter Parish Proclaimer.