The chapel in the corner of the north transept is dedicated to St. Wilfrid (634-709), bishop of York, a great defender of papal authority who did much to bring the Celtic Church into closer touch with Rome. During a dispute over the division of his See of York, he sought refuge in Sussex, the last stronghold of paganism in Anglo-Saxon England. During his stay of six years, he established the Christian faith, founded monasteries and churches and laid the foundation for a future diocese at Selsey (later Chichester).

The sculptured reredos of the altar represents Christ rising from the tomb with the Archangel Michael and St. George, both patrons of soldiers. A window in the north wall (left of the altar) represents Wilfrid seated in his Bishop’s chair. The window above the altar represents Wilfrid’s missionary work in Sussex; the first light to the left shows the already Christian King of Sussex, Edilwalch, welcoming Wilfrid; the second shows him preaching; the third depicts him teaching the Sussex men fishing skills; and the last light shows the Saint baptising and, at the same time averting a famine, by bringing down abundant rain.

This chapel also serves as the War Memorial chapel. There is a plaque to men of Arundel who fell in both World Wars and the base of the altar is adorned with the wreaths of poppies.

Immediately adjacent to St. Wilfrid’s Chapel is the Lady Chapel. Note the change in colour of the carpet and curtains from the prevailing red of the Cathedral to the blue traditionally associated with Our Blessed Mother.  The chapel is distinguished by what is believed to be the first English Tabernacle made after the Reformation. The tabernacle was discovered in a lumber room in Cathedral House in 1976 and narrowly missed being given to a passing costermonger. In this tabernacle was found the original parchment which says: “This Tabernacle was made by Chas. Kandler, Goldsmith at the Miter in St. Martin’s Lane for his Grace Thos. Howard Duke of Norfolk Anno Domonie 1730”.

High up in the pillar at the left-hand entrance to this chapel is the white and blue statue of Our Lady of Lourdes to whom Duke Henry, like so many Catholics, had a great devotion. The window to the left of this chapel shows pilgrims at the Shrine of Our Lady of Lourdes in the Pyrenees. Duke Henry, his Duchess, Flora and their son Philip, who died at the age of twenty-two, are at the bottom right-hand corner, and a little above them a Sister of Charity and a Carmelite nun refer to two sisters of the Duke who entered convents. Prelates and other pilgrims in Victorian dress approach the shrine, where you will distinguish the well-known candle stand before the grotto, the upper basilica, and the background mountains, and Our lady appearing to  Bernadette. The next window represents (from the bottom) Mary as Queen of Christians, Mary interceding for the faithful departed, and Mary Star of the Sea. Intertwined are the words of the hymn Ave Maris Stella. Next to this another window represents the Virgin of Sorrows, violet robed, her heart pierced with a sword, and surrounded by emblems of the Passion. Above is the Assumption and finally the Coronation of Mary in heaven. If you are able to distinguish them overhead, the bosses in the vaulting of this chapel are the finest in the Cathedral. They represent the Birth of Christ, Mary’s Assumption and a Pieta – Mary with the dead Christ in her arms. The main statue within this chapel is a representation of Mary as Our Lady of Sorrows. 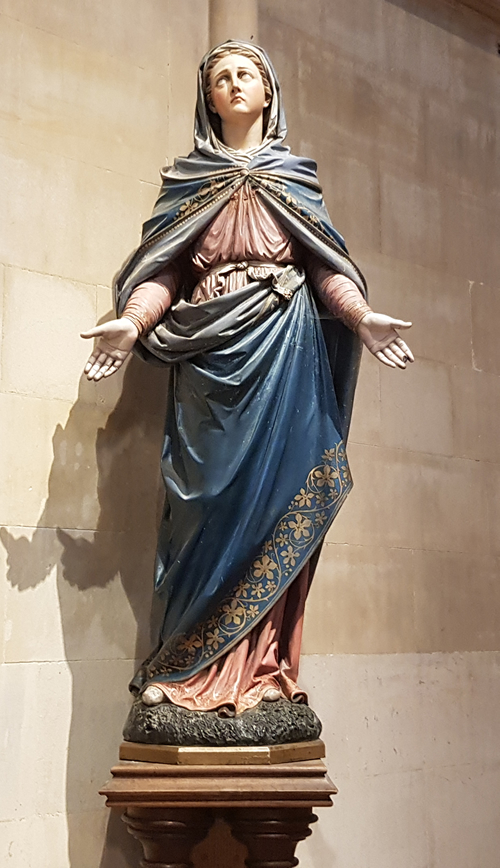