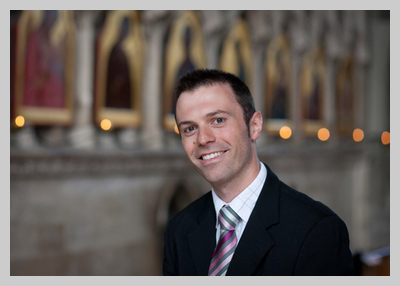 Richard says “being brought up as a chorister, I was introduced to the intoxicating sound world of choirs, organs and acoustics at a very early age. The first CD I ever bought was a recording of St Paul’s Cathedral Choir under the inspirational late John Scott. I was hooked on choral and organ music, and have never looked back”.

After spending a decade working at some of England’s busiest cathedrals and churches, Richard became a freelance musician combining the roles of Director of Music at of a thriving church in Hampshire, founding Musical Director of the London-based choir CONSORT SW1, Accompanist to Romsey Choral Society, started his own record label and runs BEAUTY IN SOUND – a YouTube channel with almost 70,000 subscribers. He is also an Assistant Organist at Arundel Cathedral.

Being an accompanist and a recitalist, Richard has performed and played up and down the UK, and has worked with many professional choirs as well as orchestras such as the Bournemouth Symphony Orchestra and Britten Sinfonia. He has also played in the band Jethro Tull in Winchester Cathedral – a particular highlight!

As a conductor, Richard was the founding Director of the Winchester Cathedral Chamber Choir and Musical Director of Froxfield Choral Society. In 2018 Richard formed CONSORT SW1 who have performed in Arundel Cathedral and a sell-out concert in Winchester.

Regarding BEAUTY IN SOUND, “I’ve always had a fascination with sound recording, and YouTube has allowed me to use my experience as an organist in conjunction with my passion for recording and trying new things. I was very proud to have been the one of the very first people in the world to perform a live organ recital on YouTube during the 2020 pandemic – a time when live music had suddenly stopped. Being able to provide music to people around the world who are experiencing personal difficulties is such a pleasure. It is my proudest accomplishment”, says Richard.