Built on the crown of the hill where the South Downs meet the outskirts of the ancient town of Arundel, and dominating its western aspect, Arundel Cathedral is a landmark in the countryside of West Sussex. This great church owes its existence to the generosity and foresight of Henry, fifteenth Duke of Norfolk, Earl Marshal (referred to here as Duke Henry), who commissioned the building soon after this coming of age in December 1868. On 27th December 1869 work commenced under the architect, Joseph Aloysius Hansom, who also designed Birmingham Town Hall and numerous Catholic churches and convents, but is more widely known as the inventor of the Patent Safety Cab – the Hansom Cab. Difficulties were encountered with the foundations which necessitated sinking concrete supports as deep as 57 feet. In some respects it was found impossible to carry out Hansom’s plans, notably the construction of the 280 feet spire where only the base which forms the north-west porch was completed. The Church, of brick clad with Bath stone, was completed in little over three years and opened on 1st July 1873 dedicated to St. Philip Neri.
In 1850 Pope Pius IX restored the Catholic hierarchy in this country with the creation of new dioceses. Although St. Philip’s was not built as a cathedral, it certainly can be seen as an expression of a spirit of renewal, a return of spring to English Catholic life. The architectural style chosen was French Gothic of about 1400; even more than the Castle it gives Arundel its exciting and oddly French skyline. This is best conveyed when you approach from the east, along the A27 – the thrust of buttresses, the lift of pinnacles around its lofty apse, the slender flèche over the sanctuary impart an effect which has been compared with Beauvais, and even with Le Mont Saint Michel. For nearly a century St. Philip’s was no more than the parish church for the Catholic population of Arundel, in the diocese of Southwark. In 1965 a new diocese of Arundel and Brighton was created. St. Philip’s at Arundel became the cathedral, and here the late David John Cashman, a former rector of the church, was enthroned as the first bishop.
The original dedication of the cathedral was to the sixteenth century Italian priest, St. Philip Neri (1515-1595), known as the Apostle of Rome, who founded the Congregation of the Oratory (Oratorians) which staffs the famous Brompton Oratory in Kensington. Duke Henry was educated at the Oratory School in Birmingham under the supervision of Blessed John Henry Newman and the influence of the Oratorians was also to be found at home where Fr. Faber of the London Oratory was spiritual director. Duke Henry was influential in the bestowal of the Cardinal’s hat on Newman in recognition of his work for the Church in England.
When St. Philip’s became a Cathedral in 1965 the dedication was changed to Our Lady and St. Philip Neri. In 1971 the remains of the martyred thirteenth Earl of Arundel, St. Philip Howard (1557-1595) were brought from the Fitzalan Chapel and enshrined in the Cathedral; the dedication was then changed again in 1973 to Our Lady and St. Philip Howard. This final change of dedication followed the canonization of Philip Howard together with 39 other English and Welsh martyrs of the Reformation on 25th October 1970.
The architectural grandeur of St. Philip’s is seen to best advantage from a distance – from the streets of the town, from the banks of the river Arun or from beyond. Viewed from the A27 as one approaches from Worthing or from the Ford Road, the Cathedral with rooftops clustering around makes a delightful picture. The West facade is particularly striking with the figures of Christ and his Apostles and at the apex of the West portal a delicately sculpted Mary with her Divine Child. Above is the great rose window which is one of the finest features of the building. 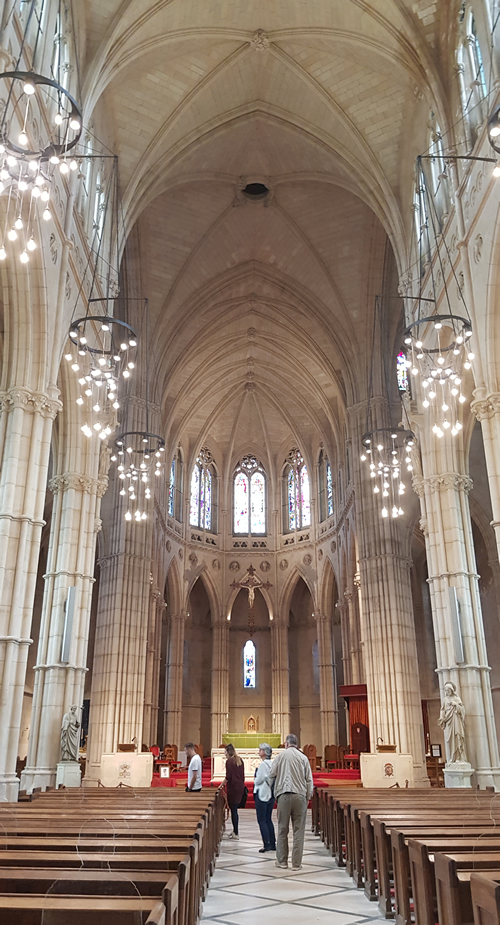 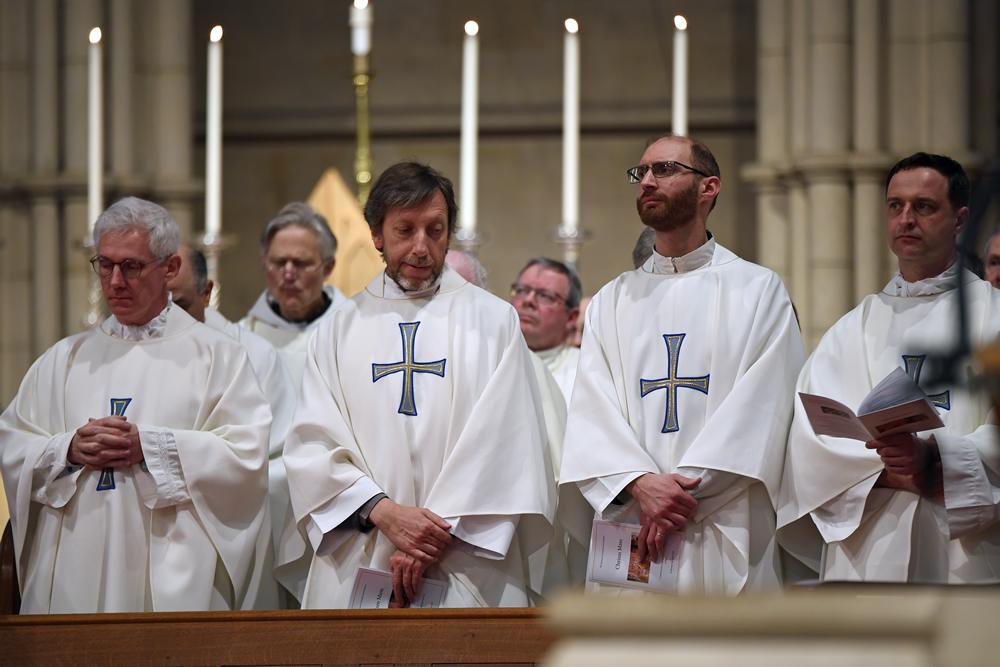