General description of the organ as a musical instrument

Many friends of mine, who play the organ, often describe it as ‘an orchestra at our disposal’ – and I agree! We feel that its wonderful beauty of sound and range of expression causes the organ to be the ideal instrument for church worship, as hymns and pieces can be played on it, which reflect the whole range of our emotions in relation to our spiritual life and adoration of God.

This is certainly true of our organ here at Arundel Cathedral.

The building of our organ and how it came to Arundel

Following the Act of Catholic Emancipation in 1829, the Catholic faith experienced a period of resurgence, and the prominent Catholic family of the Norfolks in Arundel was highly influential; Duke Henry XV had a passion for organising and commissioning the building of great churches under his patronage, and our Cathedral (which was at that time the church of St. Philip Neri) was an important example of this.

Our church was designed by Aloysius Hansom (of ‘Hansom cab’ fame) and was built in the astonishingly short time of three years. The opening ceremony on 1st July 1873 was a magnificent occasion. The Tablet of 1873 records: The Pontifical High Mass was sung by the Bishop of Southwark; the music… was interpreted most effectively by the executants, vocal and instrumental. So also, in as far as the instruments were concerned, was the grand concluding march from the opera Tannhäuser by Wagner.

The organ was brought down from Islington and was installed rapidly in time for this opening ceremony; further additions were then made by Thomas Hill, who inherited the firm from his father and grandfather. 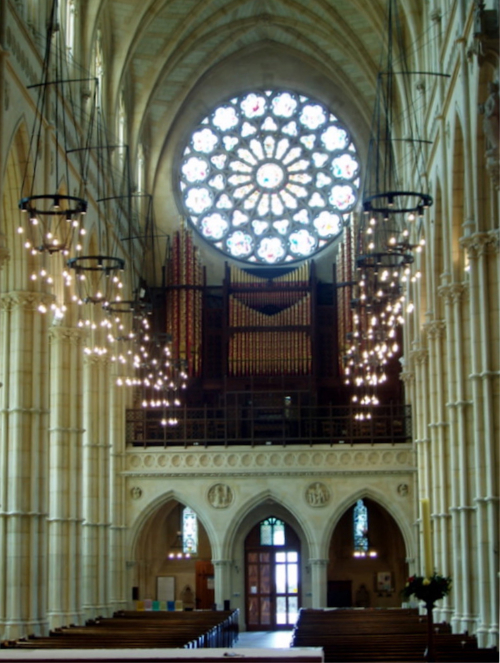 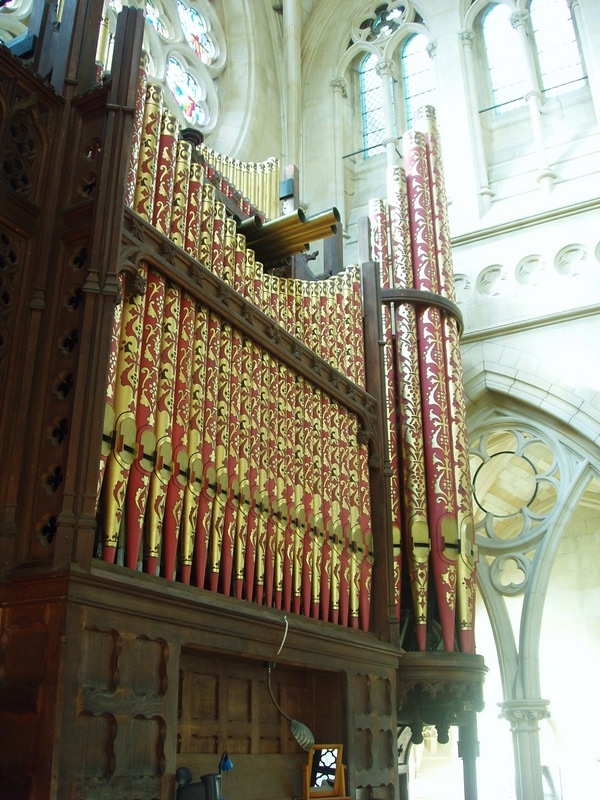 A general description of our organ, and its place in the development of British organ building

Our organ has three manuals (keyboards placed one above the other; each keyboard has black and white notes, arranged like those on the piano).

Below the player there is a whole additional range of notes (pedals) played by the feet, using the toe or the heel of each foot).

Stops are knobs placed on each side of the player. When a stop is pulled out it releases air into a whole row of pipes, enabling all the notes to be played with the same sound quality. The stops have different names that describe the type of sound, which will be produced when the notes are played; for example:

Diapason: a general, composite sound that gives a foundation for the playing of hymns. Octave: this brings into play a row of pipes that sound an octave higher than the written musical note.

Then there are various stops that enable the organ to imitate orchestral sounds: there are stops which, when they are pulled out, bring into play rows of pipes imitating the sounds of the Trumpet, Oboe, Flute, Viol (a string-like sound), Clarinet and Trombone. (These stops can be used to create a solo effect, or to be combined with others)

Until the beginning of the 19th century, British organs were fairly small in size, and had less variety of sound than they do now – the music written for these instruments was quite light in texture. Many attractive pieces written in the 17th and 18th century can be played very effectively on our organ.

Examples of these major developments in organ building included:

A much greater range of ‘orchestral’ sounds, and a much wider tonal variety of sound, ranging from very quiet to thunderously loud!

Pedals: the whole range of notes to be played by the feet was common in France and Germany, but very rare in Britain. The firm of William Hill and Son was again ‘revolutionary’ in this respect.

Wind power: new, more advanced methods were developed, enabling increased wind power to be activated: this means that an impressive climax can be achieved by ‘building up the sound’.

Three different keyboards are included in our organ: The ‘Great’ is the central keyboard and the most powerful in sound; The ‘Swell’ is the uppermost of the 3 keyboards and, like the ’Great’, has its own range of sounds ranging from very soft and gentle to very loud; The ’Choir’ is placed below the ‘Great’ and has mainly quieter sounds available, with the exception of the loud ‘horizontal trumpet’.

Special features of our organ

The ‘horizontal trumpet’: trumpet-shaped pipes can be seen pointing forward, projecting the brilliance of the trumpet sound into the body of the church.

The organ pipes are decorated beautifully in red and gold, creating a magnificent artistic effect against the background of the rose window.

Changes made to our organ since it was first built

In 1888 and 1931 work was done in order to solve some problems, for example: noisy ’action’ – when keys were played they made a distracting ’clicking’ sound’; also problems with ‘winding’, i.e. the wind power was not sufficient to maintain a strong sound, and when a loud piece of music was being played, the sound would fade and die away too quickly.

In the revision undertaken in 1968, further rows of pipes were added, which produced sounds in imitation of those used in French organs at that time. These were included as part of the organ when I first played on it, in the late 1980s.

The most recent overhaul of the organ was undertaken in 2006, under the direction of Ian Bell. Advisers in this project included Paul Inwood, Catherine Christmas, Elizabeth Stratford and Nicholas Thistlethwaite. I also attended at least one of the meetings as an observer.

The main aim of this project was to restore the organ as nearly as possible to its original character. This was achieved through much detailed discussion involving the advisers mentioned above, and the Deans of the Cathedral: Canon Tony Whale, followed by Mgr. Jeffrey Scott and Canon Tim Madeley. An organ fund to help finance the project was also set up by Canon Tony Whale. 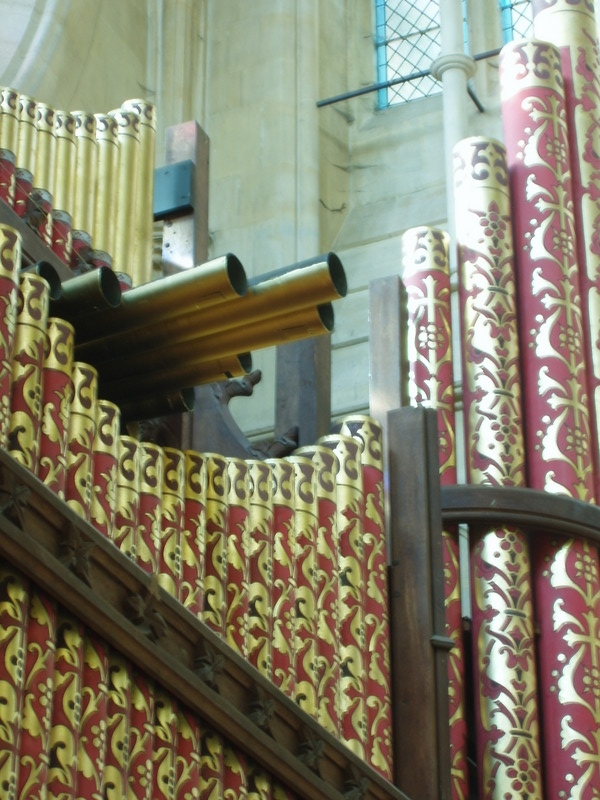 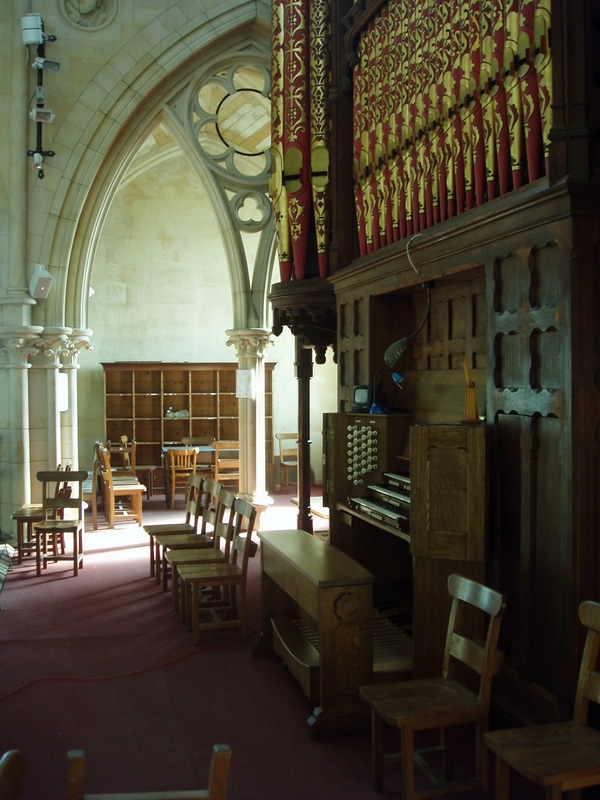 My experiences on the organ

When I first played the organ it was as a ‘stand-in’ for Philip Taylor who was ill. Stephen Dean, the choir director, organised all the changes of sound activated by the stops on the organ, while I learnt the notes. The beauty of the organ entranced me and a few years later I was able to study it seriously, when I moved to West Sussex.

Many visiting organists have expressed their high opinion of the organ’s beauty and impressive range of sounds, enabling repertoire to be played from a variety of composers from different periods and countries. Also in hymns the contrasts in the words can be very effectively brought out. For example, in the hymn Dear Lord and Father of mankind in the last verse, the sound can be built up dramatically at the words ’Breathe through the earthquake, wind and fire’, and the sound can then be gradually and expressively softened to express the words, ‘ O still, small voice of calm’.

One organ book which I have owned for a while, says in its introduction: ‘Welcome to the King of Instruments’; no, cancel that: ‘Welcome to the world’s greatest booby trap’. All organists can, I am sure, think of some time or other when they have fallen into a trap, musically speaking. Various examples from my own experience spring to mind…. Also, an example given in my organ book quoted above: The organist had arrived to play a grand service on an unfamiliar organ, with the Bishop present amongst many other important dignitaries. Unfortunately he pressed the wrong button, and instead of a grand, dramatic drum-roll he got the sound ‘Cuckoo, cuckoo.’

Despite the occasional mishap, there is so much spiritual inspiration, and enjoyment, to be gained by playing this beautiful instrument.